The Dr. Milo Team would like to share with you how our Topical Relief Lotion works and the scientific process behind our creation.

So let's dive in:

Dr. Milo Topical Pain Relief Lotion works with herbal plant ingredients along with Cannabinoids found in Full Spectrum Cannabis Hemp plant that is then Nano-Emulsified to target the Endocannabinoid System to create homeostasis in the body.

We thought this was a mouthful at first too… But after years of research and development we’ve come to better understand how it all works.

THE ENDOCANNABINOID (ECS) SYSTEM
We all learned about the human body systems growing up, but there is a new system that has been recently discovered, researched and recognized by the scientific community. The Endocannabinoid System. The ECS is made up of three parts: Endocannabinoids, Receptors, and Enzymes. The two Receptors in the ECS system that are known to be found are CB1 (in the central, nervous system) and CB2 (the nerves in your extremities; meaning the digestive and immune systems). The Enzymes function to help break down the cannabinoids throughout the ECS. These Cannabinoid receptors are known to be the most plentiful in the central nervous system. The ECS appears to play an important role in the secretion of hormones related to reproductive functions and response to stress. The ECS is a crucial, and natural part of our bodies that regulates and modulates almost all of our important functions such as: appetite, digestion, immune function, inflammation, mood, memory, motor control, pain, pleasure/reward, fertility, and temperature regulation. The ECS is KIND OF A BIG DEAL.
CANNABINOIDS
The cannabis plant produces over 480 compounds, dozens of which are known as cannabinoids. Cannabinoids work by interacting with certain receptors found in parts of the central nervous system. From euphoria to an enhanced enjoyment of flavors, cannabinoids are able to significantly impact the brain and body. The reason they’re able to do this is that they interact perfectly with the human endocannabinoid system.
ENDOCANNABINOID

Endo (endogenous) means that it is produced naturally inside your body … and cannabinoid refers to compounds found in Hemp and Cannabis. So, endocannabinoid simply means cannabis like substances that naturally occur in our bodies. That’s right… We actually produce our very own cannabinoids without ingesting any substances!

Two primary endocannabinoid receptors have been identified, they are CB1 (1990) and CB2 (1993). CB1 receptors are found primarily in the brain and are influenced by anandamide, a neurotransmitter responsible for pleasure, motivation, and hunger. This same neurotransmitter is released during exercise and causes “runner’s high.” CBD does not directly bind to CB1 receptors; (THC does that), but indirectly inhibits them. This is why CBD can be used to reduce how high you feel and has been proven to reduce psychological and mental stressors in the brain.

The unbalanced functioning of CB2 receptors have been linked to virtually every type of human disease from cardiovascular, gastrointestinal, neurodegenerative, autoimmune, skin, bone, cancer, and even pain-related disorders. As cannabinoids enter your bloodstream, they act on CB2 receptors throughout your body to promote homeostasis, or stable equilibrium, of the endocannabinoid system.

“Full Spectrum” means that the WHOLE PLANT is used, and nothing is isolated. In our full spectrum NANO products, cannabis hemp plants are produced to retain all the elements of the plant. The Terpenes, Cannabinoids, flavonoids, all fatty acids, plant sterols, natural vitamin E, and chlorophyll; everything naturally occurring in the hemp flower. Having the whole plant processed together creates an interactive synergy- meaning we’re letting nature do its thing. This increases our products therapeutic power and allows it to work at its highest state, unprocessed.

*A WORD ON THC: Our product contains trace amounts of THC. This is because THC naturally occurs in the Hemp plant. Also remember our hemp is unprocessed, so we still get about 0.3% THC. But, this amount will not get you high (if that’s what you’re looking for.) Most often, If a product advertises as full-spectrum remember that there is no such thing as THC full-spectrum products – instead these are generally isolates.

CBD: THE SHOWSTOPPER CANNABINOID
CBD = CANNABINOIL. CBD is one of over 100 CANNABINOIDS found in the cannabis hemp plant. CBD is not Psychoactive (meaning it won’t get you high), unlike its cousin CANNABINOID THC. CBD works within your body (ECS Endocannabinoid System) to reduce inflammation, reduce stress, and manage pain. It produces zero high, but does utilize your body’s natural ability to rebalance itself. CBD works by targeting the cannabinoid receptors throughout the body. For now, CBD is only the tip of the iceberg. There are hundreds of cannabinoids to be explored and utilized for their healing functions. We’re thankful for the discovery of CBD and excited for the future of the cannabis plant.
CBN: THE RELIEF CANNABINOID
CBN is another Cannabinol found in the Cannabis plant. It is also a non-psychoactive compound and is usually present in high amounts in older cannabis/hemp plants. Some studies have found the benefits of CBN are that it is anti-bacterial, a neuroprotectant (meaning that it protects proper brain function) and is anti- inflammatory. CBN was shown to reduce arthritis in a rodent study, and although more research needs to be done, this could end up being an incredible help to those suffering from debilitating inflammation.
CBG: THE MOTHER OF ALL CANNABINOIDS
CBG, or Cannabigerol, is a common cannabinoid found in cannabis plants. This powerful cannabinoid is not non-intoxicating but does offer a whole host of therapeutic benefits. CBG works to fight inflammation and pain like the others but research has shown that it significantly reduces interocular eye pressure caused by glaucoma and works to slow the proliferation of cancer cells. Like CBN and CBG, CBG also shows benefits for reducing stress and anxiety.
ARNICA MONTANA: WHY WE’RE IN LOVE WITH THIS FLOWER

The Arnica Montana flower is a beautifully bright yellow perennial herb belonging to the sunflower family. It was found on the upland meadows in the mountains of northern and central Europe and Siberia in the 12th century. The Arnica Montana species contains an anti-inflammatory compound (Helenalin) known to relieve muscle soreness, stiffness, joint aches and bruising when applied topically to ailments from minor injuries, overexertion, post workout soreness, playground bruises, post-surgical bruising, Arnica Montana is an incredible addition to our formulation. We’ve been using it our entire lives.

HOMEOSTASIS
Homeostasis is basically your body’s ideal balanced and stable zone. Think of it as the feeling after a yoga class or meditation. Your body and mind feel in the right zone. Homeostasis is the same idea, but on a cellular level. The endocannabinoid System is crucial in keeping the body in Homeostasis. It tries to keep your internal environment stable no matter what is going on in the environment around you. Is your heart beating too fast? Have you had too much Caffeine? Do you need Fuel or rest? When something in your body is operating outside of the right “zone” or Homeostasis, your body’s ECS system kicks in to help correct it.
NANO EMULSIFICATION: 5X STRENGTH
NANO CBD/CBN/CBG makes Dr. Milo water-compatible for faster absorption, it also up’s the strength 5x. Our water compatible CBD/CBN/CBG are formulated using our Organic full spectrum hemp, emulsified and suspended in distilled spring water. Emulsification is the process of dispersing one immiscible liquid into another immiscible liquid. In Dr. Milo Topical Pain Relief, we do this with oil and water.
THE NANO SCIENCE:
NANO-emulsions are emulsions with a droplet size between 20-500nm. NANO-emulsions are thermodynamically stable, isotropic systems that consist of two immiscible liquids (oil and water). Our Hemp oil is dispersed very finely into the water droplets in order to form a single molecule encapsulated in water. Because Nano-emulsion droplets of CBD oil are so incredibly tiny, they can pass through the epidermis, enter the blood stream and get to a deeper layer of tissue (muscle/tendons.) NANO-Emulsions show an improved absorption (bioavailability) of cannabinoids. Because the absorption rate improves significantly, we can lower the dose to 200 MG of NANO CBD/CBN/CGB, and give you a more rapid, long lasting relief to take the edge off.

Keep up with the latest Dr. Milo news, products and promotions. 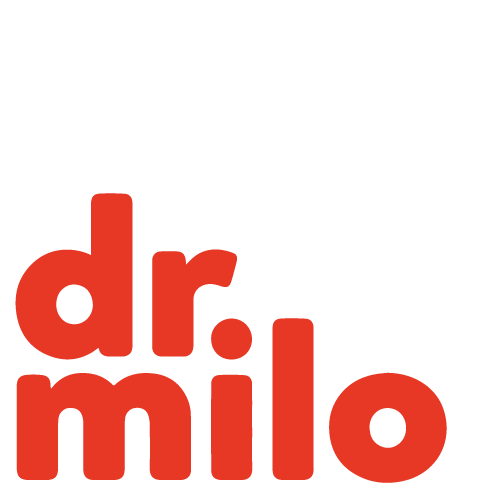 Facebook Youtube Instagram
FDA DISCLAIMER These statements have not been evalated by the FDA. These products are not intended to diagnose, treat or prevent any disease. © 2021 Dr. Milo, LLC | All Rights Reserved